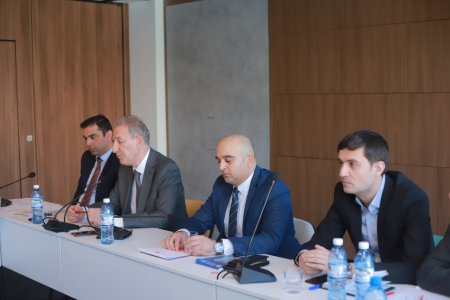 The conference was organized as part of the presentation of the Roadmap "On stimulating and expanding the use of environmentally friendly vehicles in Azerbaijan." The event was attended by the State Customs Committee, the Ministry of Ecology and Natural Resources, the Ministry of Energy, business representatives and independent experts. The presentation provided detailed information on the work done by the state in this area, future plans and the support of the private sector in this work.


Eyyub Aliyev, a member of the AADA Audit Committee, informed about the research conducted by the Public Union in recent years and the proposals sent to the relevant government agencies. It should be noted that AADA unites official importers of more than 40 foreign car brands, as well as local car manufacturers. The Association's Analytical Center has studied the changes in the laws and regulations governing the import and sale of cars in recent years and the impact of these changes on the activities of official car dealers and the automotive sector in general, prepared the package, presented it to the Cabinet of Ministers and relevant Non-Governmental Organizations of the Republic of Azerbaijan, held relevant meetings and discussions, and reported to the public through the media.

It should be noted that in early 2014, due to a sharp increase in the number of problematic car loans issued by banks in February 2014, restrictions were imposed on this type of lending. The down payment increased by 40-50 percent of the car's value, resulting in a significant decline in sales of new cars.

Unfortunately, the crisis in the global economy at that time could not go unnoticed for us. Thus, the two devaluations that took place in January and December 2015 resulted in a more than twofold increase in the prices of all imported goods, as well as cars, in the national currency. Other factors that hit new car sales were new excise taxes imposed in 2015 and 2017, a new customs duty in January 2018, and another new excise tax in January 2019. As a result, the price of new models has become unaffordable for the majority of the population. Restrictions imposed in connection with the subsequent Covid-19 pandemic have further escalated  the situation in the official car market.

Speaking at the press conference, Tariyel Alverdiyev, head of the customs payments department of the State Customs Committee, said that currently the expansion of the scope of environmentally friendly cars with concessions is being discussed.

Rauf Gurbanov, head of the economy department of the Ministry of Energy, mentioned that there are 33 electric car charging stations in Azerbaijan: "22 of these stations are located in Baku and 11 in the regions."

Rasim Sattarzadeh, an official of the Ministry of Ecology and Natural Resources, answered journalists' questions about the government's social issues. "But the import of these cars should be restricted to prevent environmental pollution," he said.

Speaking at the event, Eldaniz Jafarov, an expert and member of the Working Group that prepared the Road Map, noted that increasing the use of environmentally friendly vehicles is extremely important for the realization of national priorities for 2030. "The creation of favorable conditions for the operation of environmentally friendly cars in the country has led to growth in this area. We believe that the private sector will also contribute to this process, "he said.